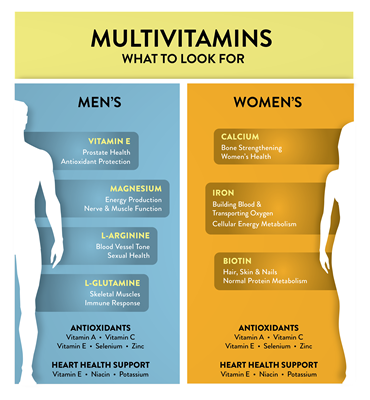 However men are more susceptible to accumulating excess Iron so their multivitamins will not have extra Iron.  A woman who is pregnant will need Folic Acid as it helps with the babies development and prevents birth defects.  Since almost half of all pregnancies are unplanned, women’s multivitamins usually contain Folic Acid but it is unnecessary for men.

Women also tend to suffer more than men from losing bone density after the age of thirty so they may benefit from taking extra Calcium.

Multivitamins aimed at men are usually concerned with preventing prostrate and colon problems.  Zinc is known to help with prostrate health so it should be included in any multivitamin aimed at the male market.  Also look for Selenium, which is a mineral that helps with healthy sperm production.  It was thought for a time that Lycopene could lower prostate cancer risk.  However a study by the National Cancer Institute and the Fred Hutchinson Cancer Research Center in Seattle in 2007 found no evidence that Lycopene had any effect.  Despite this it is still a popular component of men’s multivitamins. Many multivitamins for men also mention that males require more Vitamin C than females.  While this is technically true, both sexes require Vitamin C and studies show that the extra amount required by men is only 25mg.

Lifestyle also plays a part in which minerals or vitamins companies presume the different sexes are deficient in.  Women are traditionally seen as more likely to skip meals and eat restrictive diets.  Men are presumed to eat more processed food and less vegetables and fruit.  These preconceptions tend to influence which minerals and vitamins companies put in their tablets specifically designed for each gender.  Depending on the study, either sex can be viewed as suffering more from stress.  Stress is known to affect the digestion system and what nutrients the intestines absorb.

Are There Any Dangers To Taking a Multivitamin Not Designed For Your Gender?

So does it matter if you take a gender specific multivitamin?  Probably not.  Many experts feel that multivitamins do not contribute to our health in any noticeable way.  On the other hand, many feel that few people today eat the kind of healthy, balanced diet necessary to give us the recommended daily amount of  vitamins and minerals.  Taking a multivitamin can be viewed as a safety net to fill in the missing components of our diets.  As mentioned above, gender tailored multivitamins do contain elements that the opposite sex does not require.  While some of these, such as Vitamin C, do not accumulate in the body others, such as Iron, can cause problems if taken in excess of what is needed.  Changes to the body caused by the ageing process also need to be taken into account.  For example, after the menopause women no longer need extra Iron or Folic Acid.  So if you regularly take a multivitamin designed for the opposite sex then it could eventually cause health issues.

Obviously the best thing to do if you are concerned about this issue is to take a gender neutral multivitamin.  Not only will you not have to worry about if it is correct for you but they tend to be cheaper.  If you would prefer to benefit from a multivitamin designed for your gender it would be wise to do a little research.  Look at the recommended daily amounts for your gender.  Consider your age and lifestyle and environment.  Then find the list of ingredients contained in the multivitamin you are considering buying and look them up to see exactly what health benefits they offer.  While this may take you a couple of hours work you can be confident at the end that you are getting the best multivitamin for both your money, gender and health.